Rufford: Fished my whip, struggled to catch at first, had the odd Skimmer and Roach, I did end up catching a lot of Roach though when I fished up in the water rather than an inch or two over depth. There was a bloke fishing next to me, he had around 2 or 3 fish the whole day. If you're fishing the canal, I recommend that you scale down you approach, I fish a 22's size hook, to 1 and a half pound bottom, shotted down with size 8 shot. I'm fishing punch bread, and feed loose liquidised bread over the top. I roll my bread with a rolling pin and keep it in a sandwich bag during the session to keep it from drying out. Usually I fish a couple of inches over depth or like to day up in the water by a foot or so.
Posted by THE PIKER at 21:57

Sollom: A few hours in the afternoon, I Headed back to the same swim that I fished yesterday. I had one Skimmer and a few Roach, the best of the bunch was a cracking Roach of 12oz, possibly the biggest Roach I've caught out of the canal. 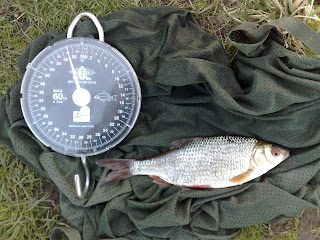 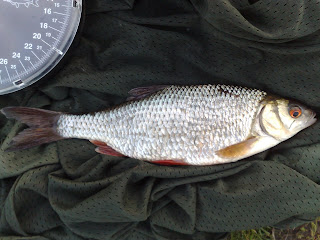 Ahhhh! So that's how to catch them

Sollom: I fished 2 Pike rods, and fished on my whip. I was struggling on all fronts, until around dinnertime when I switched baits on my whip, instead of maggots I fished bread punch. The results were amazing, it was pretty much a bite a chuck. I ended up with a few Roach and I had a fish on my Pike rod, a Jack Pike of around 2lb, interestingly the Pike had a growth known as a Lymphosarcoma on it's tail. This is a cancerous growth, Im not too sure as to the long term problems this may cause the Pike? 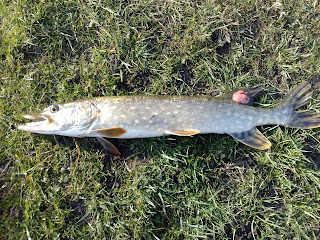 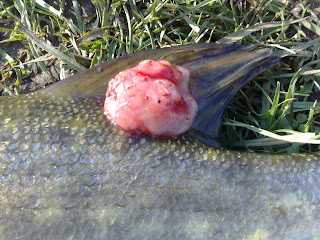 Extra Time In The Pike League

Ben caught a fish....The End! Is how I'd like to have written this diary entry, however I suppose I'd better add a little more detail. Ben decided to join me on my last day of the season session, it seemed a good idea at the time, until he caught a fish of 10lb and as I blanked he managed to knock off 10 points on the league. The only Pike that I had on the bank was the result of a bizarre incident. My float was away and under, Mint! I thought! I'm In! And indeed I was in, in for a shock that is, I struck into the take, then I was greeted by a dead Pike that, aided by the tow in the water happened to snag my line, I even managed to hook the pike in it's fin, the Pike was around 8/9lb's. I tried to claim the points, but Ben wasn't having any of it. Damn! :(
Posted by THE PIKER at 22:09

Well today was to be the last chance that myself and Ben would be able go Piking together this season, and so bringing an end to our Pike league, we fished a total of 14 matches this season, and on reflection, it's fair to say that we were both pretty disappointed in the results. We caught 93lb of fish between us, 37lb for Ben and 56lb for me. Consider that on some occasions when I have fished on my own I have had over 40lb in one session, the Pike league figures don't read too well. Still we had some great laughs and we did catch some fish. :) My highlight of the season was catching the 16lb'er from the swim that Ben wanted to fish. GOOD!
Posted by THE PIKER at 19:13

Not the most productive session

I fished the Match length of the Sluice today, It wasn't the most productive of sessions, I had one take in which the fish came off on the strike, and One fish of around 4 to 5lbs's. Still! Better than a blank I suppose. I struggled to even so much as a bite on my whip, I offered some nice juicy red maggots, but there were no customers to taste my goods.
Posted by THE PIKER at 22:29

Quick session on the canal

A quick session on the canal today, I arrived at around 4pm, and stayed till dusk. I chucked a Pike rod out and fished in my whip, the session was pretty quiet, I had one bite and one fish, a decent sized Roach hybrid. 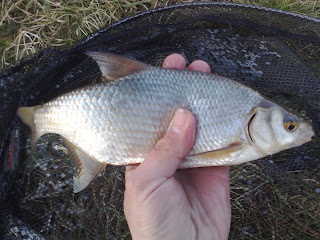 A change of scenery

A lot of rain had been put down over the last day or two, this put me off going to the Sluice, incase it had coloured up. So for a change I headed over to the canal at Sollom. Now the River fishing season will be coming to an end on the 15th March, so I'll be having a bit of a campaign on there. This water is not known to hold big fish, and contains quite a few Jack Pike, so why bother? Well I am constantly bothered by stories of bigger fish turning up, I've heard of 18's 17's 12's and 10's. To date I have never caught a double out of any canal, so this is a target I have set for myself between close season and May 1st. Today's session was pretty bleak, although I awoke to snow, this soon cleared, and the weather held out for the whole day. I fished one Deadbait rod and I also fished on my whip, amazingly I had one fish all day, and that was a small Roach, I just couldn't get a bite. My Deadbait rod did get some action though and the float was well under and away, but there was a problem, when it picked up it's little snack it decided to head into the reed bed, this posed a problem, fearing that it may get snagged in there I was forced to strike a little earlier than I'd have liked, I struck into the fish, which I noticed was a decent size, enough for me to open the clutch and give it line. Sadly though whilst playing the Pike it managed to shake free from the hooks. Damn! It proves one thing to me though, there are Pike worth targeting in this section, and I'm looking forward to my canal sessions First Pike on the new rod

I bought 2 Pike rods this week they're FOX M Boat 10ft 9" 2.5TC and I wanted to try one of the out so I headed back to the peg that was rather productive for me last Monday. After around an hour my new rod was in! I struck into the fish, and I was really pleased at the rods through action and performance when playing the fish. The Pike was around 10lb's, not the longest of fish, but she was pretty fat, I'm guessing that she was full of spawn. And that was it. There was no more action for the rest of the day, I did catch a few Dace on my whip which were a lovely colour of Blue. The weather was really bad throughout the afternoon I was battered by wind and rain, and took shelter in my Stealth Brolly.
10lb Pike and trying to get to grips with this smiling thing 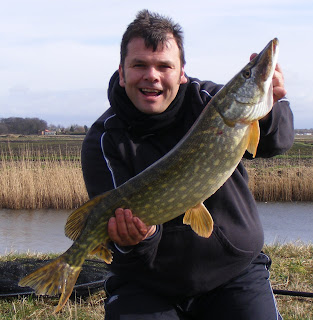