As I lay my tackle on the ground, I was rather taken aback as I observed the level of the river.

The lowest I've ever seen in in fact. It was obvious to see that if I was to catch a Barbel tonight I'd have to take into account the fish welfare, as trying to land it normally by the bank would result in a beached fish.

I'd set up, and had a coffee so I meandered over to see how Allan was getting on. "I don't fancy it tonight mate" and with that my rod bent over and line peeled off at some fair pace. Pfffffftt! What do I know eh? By recent standards it was a smallish Barbel of 6lb's or so had taken my bait.

This session wasn't exactly as busy as my last one, I did have 5 runs though, three of which I managed to land (That snag is still there) 9lb was the biggest of the night.

Allan was staring a blank in the face, pack up was looming large, when thankfully one of his rods sprang to life and a Barbel of 7lb's or so was landed. Well done mate!

It amazes me as to how fast the river can rise and fall during a session. By the time we came to pack up the water was up about three feet. 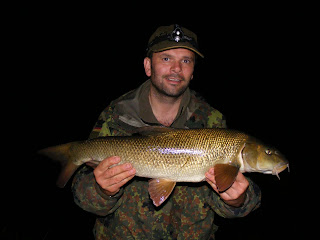 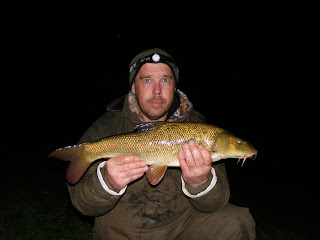 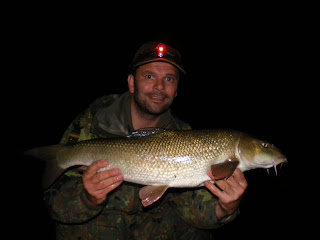